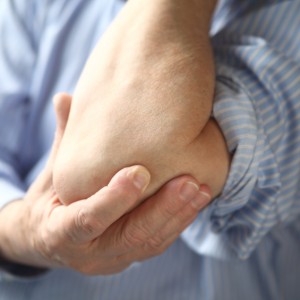 Rheumatic inflammation, such as arthritis, and associated joint pain is being experienced by more people and at an ever younger age. One in five (22%) adults in the United States report having doctor diagnosed arthritis and one in 250 children are sufferers, costing 128 billion dollars annually(1).

Traditionally safe-to-use(6), the high potency characteristics of these natural plant derived anti-inflammatory ingredients has been laboratory tested by Bioactive to be extremely effective(3). The active ingredients are used to treat associated inflammatory pain in traditional medicine “as anodyne in cases of rheumatism”(4).

Independent studies have shown that a total extract of the Khapre® – J OsteoJel  ingredients exerted as strong or even stronger anti-inflammatory effects than each of its fractions when applied as an anti-inflammatory ointment(5).

Disclaimer: Please note that any statements aligned to product descriptions on this website and the products themselves are in varying stages of evaluation by the Therapeutic Goods Administration in Australia (TGA) & the Food and Drug Administration in the United States of America (FDA). These products are not intended to diagnose, treat, cure or prevent any disease.

(2) Source: “Conclusion: In all experimental models used in this study, AKS – Aqueous stem bark extract of Khaya Senegalensis exhibited significant anti-inflammatory and antinociceptive (pain relief) properties which compare favourably well with the effects produced by the standard drugs used. These findings provide scientific basis to justify the traditional use of the plant in inflammatory diseases. The study showed that Khaya senegalensis is a medicinal plant with good potential for the development of new anti-inflammatory drugs. “; Kolawole OT, Akiibinu MO, Ayankunle AA and Awe EO., 2013. Evaluation of Anti-inflammatory and Antinociceptive Potentials of Khaya senegalensis A. Juss (Meliaceae) Stem Bark Aqueous Extract. British Journal of Medicine & Medical Research, 3(2): 216-229, 2013

(5) Thioune O, Diallo AK, Diop AB, Ngom S and Lo I: Fractionation of the total extract of Khaya senegalensis barks. Interest in the formulation of an anti-inflammatory ointment Dakar Med 48: 68-71, 2003.

(6) Safe to use: Traditional medicine applications over centuries classify the Khapre®  ingredients as GRAS (Generally Regarded As Safe). In addition, Bioactive has undertaken stringent safety profiling on their own organic & 3rd party supply of plant material to confirm the traditional safety claims. Reference source:

(7) Possible side effects: Taken as an oral formulation, known side effects may include diarrhoea, polyuria, and general weakness .  These side effects are rare and thought to be indicative of the general de-tox properties of the Khapre®  ingredients. If these side effects were to arise, additional fresh water should always be consumed. If they persist see your doctor. Reference source: Side effects from traditional medicine: Tchacondo T. Et al, pub 2010. Herbal Remedies and Their Adverse Effects in Tem Tribe Traditional Medicine in Togo. African Journal of Traditional, Complementary and Alternative Medicines, 2011;8(1):45-60.