Bioactive Laboratories’ Drug Discovery efforts were given a boost with an innovative collaborative funding model supported by the Federal Department of Agriculture and Water Resources.

The project was directed at investigating the use of bark extracts from tree harvesting to manufacture pharmaceutical products. Enhancing the non-wood benefits of tree plantation activity has commercial benefits as does research to identify and develop new pharmaceuticals to treat challenging medical conditions. 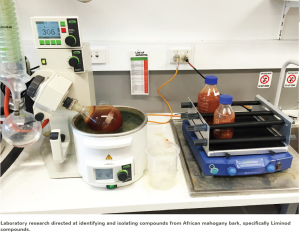 Principal researcher at Griffith University’s School of Environment, Professor Tony Carroll confirmed that the project demonstrated the potential of tree harvest residues as sources of compounds that can be used for a variety of applications, including pharmaceutical, veterinary, cosmetic, pest control and as a source of ‘rare’ fine chemicals for biotechnological research and development.

He said the lack of a sustainable supply of complex naturally derived compounds can stifle their development into pharmaceuticals, but harvesting them from plantation sources provides certainty that can aid in positive decision-making in the drug development pipeline.

Bioactive has brought forward its drug development pipeline by two years after significant infectious disease discoveries were confirmed by Professor Alan Cowman, Head of Infection and Immunity at the Walter and Eliza Hall Institute of Medical Research.

Bioactive Managing Director Rick Ferdinands, “The magnitude of these discoveries has not been seen since the early 1970’s for a major global infectious disease.”

Inside 8 weeks Bioactive & the Walter and Eliza Hall institute forged a collaboration and formed a new pharmaceutical company.

Bioactive are now finalising patents and relationships to take advantage of this extraordinary opportunity.

“With the right global partner we could see a commercial product launch of our optimised extract within 24 months post raising.” says Mr Ferdinands.

Three consecutive years of successful Certified Organic audits have solidified the Bioactive environmental credentials by approving Certified Organic status for the US & Australian markets. The US is currently the largest regulated global organic market for traditional medicine ingredients.

The US Department of Agriculture (USDA), after the third detailed on-site audit, granted Bioactive entry into the National Organic Program (NOP) and use of the coveted USDA Certified Organic seal.

The preparation and on-site audit of the Bioactive Plant Farms in the tropical North of Western Australia, was finalised in August 2013, July 2014, and again in Sept 2015. The process initially took over 2 years in the planning, but has now become an annual event.

The USDA standards require the integration of cultural, biological and mechanical practices that foster cycling of resources, promote ecological balance and conserve biodiversity. This means that organic operations must maintain or enhance soil and water quality while also conserving wetlands, woodlands and wildlife.

Consumers globally choose to purchase organic products with the expectation that they are grown, processed and handled according to the USDA organic regulations.

This achievement adds another level of partner confidence in the Bioactive quality systems, flowing on to consumer peace of mind.

Bioactive Solutions, the Research and Development arm of the Bioactive Group are excited to announce the filing of their inaugural patent. 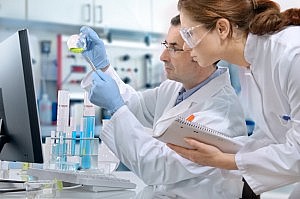 Managing Director Rick Ferdinands, “This patent, with research still in the discovery phase, represents a significant milestone in the short history of Bioactive.

The significance is in the non-synthetic plant based origins of the ‘herbal composition of an enriched extract’. As a proprietary formula, the patent abstract concentrates on ‘the treatment or prevention of inflammation’.

The flagship formula, Khapre®, based on this early discovery, is expected to be applied to many complementary medicine applications as an early commercial strategy to help fund the company’s drug development ambitions.

Currently undergoing formulation testing and analyses, it is expected that the Khapre® related product range be released in the coming years.

Our thanks must go to our early investors, the WA Government Innovations Voucher program for financial assistance and our dedicated scientific team.

Bioactive Solutions would like to take this opportunity to congratulate the Australian Federal Government body AusIndustry on its promotion of research and development in the Agri-food & Biotechnology industries. It assists business in creating positive awareness around our industries through the R&D Tax Incentive program.

From a Bioactive point of view, this awareness and promotion assists in providing existing and potential investors with comfort and information that can positively assist their investment decisions. In addition it provides awareness to customers and business partners that the Bioactive business is forward thinking in its product pipeline planning and development.

Bioactive is pleased to announce it has been granted its first registration for the new R&D grant scheme known as the R&D Tax Incentive by the Australian Federal Government Department of Industry, Innovation, Science, Research and Tertiary Education in July 2012 and privileged to have received the funding in September 2012.

Group Managing Director, Rick Ferdinands: “This funding is a significant step in the continuation of the Bioactive research efforts. Whilst I am appreciative of the dedication shown by our small group of core investors, it has to be acknowledged that private funding for any type of research in Australia is near impossible given the state of the global economy. The Australian Government is wise in supporting early research as significant discoveries, like any good investment, will inevitably lead to new sources of taxation revenue for the Australian people.”

Bioactive is the proud recipient of sponsorship funding from the Western Australian State Government through the Department of Commerce, Innovations Voucher Program.

Managing Director of the Bioactive Group, Rick Ferdinands says: “The State Government should be congratulated in supporting important Biotech discoveries in Western Australia. We are also proud to announce that this sponsorship is official recognition that Bioactive Solutions research outcomes are in line with public interests.”

As Bioactive Solutions continues its research and development program, the commercial arm of the group, Bioactive Laboratories is formed to take over preparation for production and commercial distribution.

Bioactive granted its second registration for the R&D Tax Concession

Bioactive is pleased to announce it has been granted its second registration for the R&D Tax Concession by the Australian Federal Government Department of Innovation, Industry, Science and Research in July 2011 and privileged to have received the concession funding in October 2011.